“A Riot is the Language of the Unheard”

Like many people, I’ve been thinking a lot over the past few days about race and law enforcement, and race relations in this country.

I grew up in a family where I was taught to respect others for who they are. My parents never had to tell me that the respect I show others should not be dependent on that person’s race, sex, religion, or lifestyle. They taught me to respect others, and showed me that that respect should apply to all.

I also didn’t grow up with a lot of racism around me. I never experienced it myself, and I don’t recall, as a child, seeing others experience it. I think my experience was somewhat unusual in that respect, but not as unusual as one might think.

Looking back on my childhood, I realize that I didn’t know that much about race. I remember being very young, and thinking that there were two races: white and black, and that everyone else was probably some mixture of the two. I eventually learned more as my experience increased. But as I learned more about race, I still knew very little about racism.

I think I was naïve in that regard. My impression of contemporary racism, as a child, was that a lot of people of my grandparents’ generation were racist. And there were pockets of ignorant people, like the Klan, who were still racist today. But other than that, I thought racism was part of our history.

This ignorance was part of my privilege of growing up white. Of course, as I grew older, I realized that racism was still present. Racism still affected people on a daily basis. But I still couldn’t really appreciate it.

Nearly thirty years ago, when I was almost nine years old, Rodney King was beaten by LAPD officers. This incident was filmed, and became public knowledge. I don’t actually remember it happening. I don’t know if my parents intentionally tried to shield my from it, or if it never came up in conversation when I was paying attention to them. But I’m certain that black children, much younger than I was, were aware of what happened.

Six and a half years ago, I married an amazing, intelligent, and beautiful woman, whose father is black. Over time, I’ve heard from her about her experiences with racism. She has seen it all her life. To me, it was an exceptional and awful thing. To her, it was an everyday (but still awful) thing.

As I’ve learned more from her, I’ve come to realize a few things:

The thing is, I could’ve learned many of these lessons much sooner. I’ve had plenty of black and brown friends and associates throughout my life. I’ve even talked to some of them about their experiences with racism, but it had always been somewhat superficial conversations. I had never really asked a black person to tell me about how their race affected their life.

Mostly, I’ve been pretty overwhelmed by all of this. 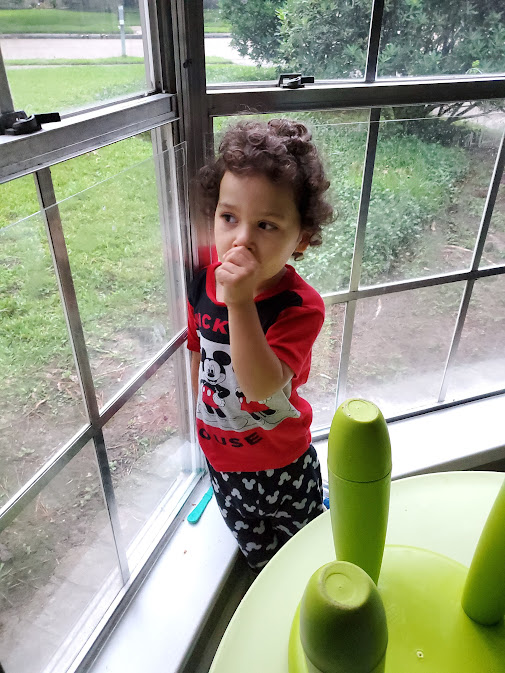 This is my son. He’s handsome, and kind, and so smart, and a little rebellious. He’s also my only child who probably can’t “pass for white”. And so, he’s also the one I worry about the most. Right now, I can protect him. But twenty years from now, he could be jogging one night, when someone sees those big, beautiful curls, and he becomes the next Ahmaud Arbery. 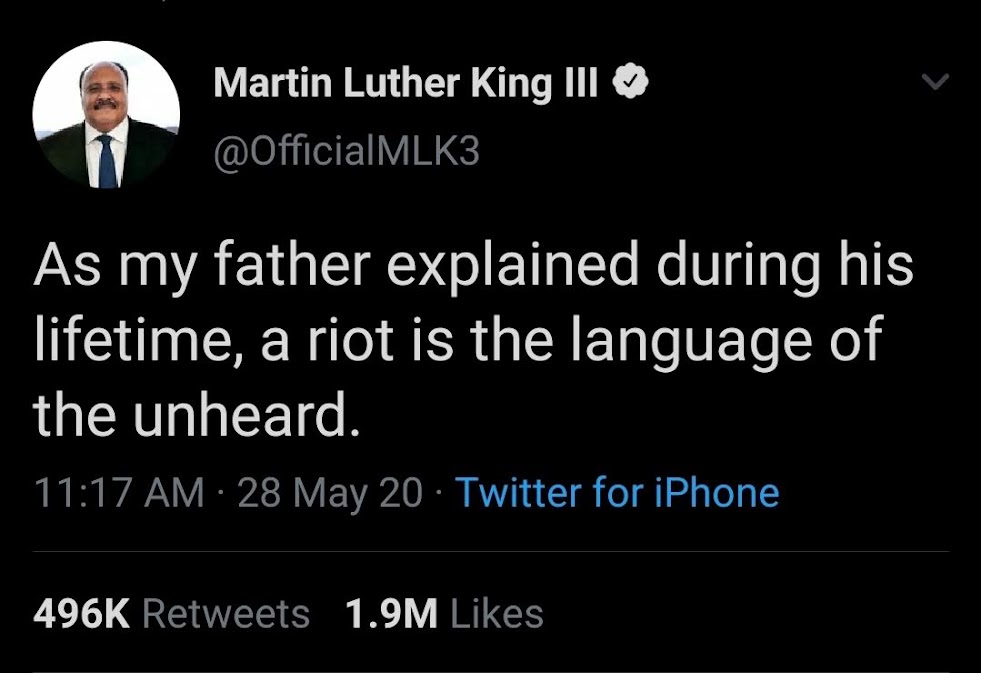 The title of my post is a quote by the Reverend Martin Luther King, Jr. I included this because I’ve seen a lot of comments on social media from well-intentioned white folks who are complaining about the rioting, and referring to those that are causing property damage as “criminals”, or as the President has said, “thugs”. It’s hard to understand why someone might go from a peaceful protest to damaging buildings.

But these people are mad. They’ve spent their lives being careful around police officers, to try and prevent one of them from losing it, and hurting them. They’ve seen the tape of Rodney King being beaten, but it’s not history for them. They have continued to see it for the last thirty years since that time. And for most of them, nothing substantive has changed. And now, a black man jogging is killed. And then another black man, while trying to enjoy his bird-watching hobby, politely asks a woman to put a leash on her dog, as she’s supposed to do, and is threatened by her as she claims she will lie to the police about him, and say he is threatening her life. She knows that saying that he’s African-American will result in a harsher response from the police. Finally, a man is killed by police, and when they protest, the President calls them thugs.

They are no longer being heard. George Floyd was not heard by the police as he pled for them to let him breathe, and in his dying moments, cried out for his mother. They are not being heard by the people who need to hear them: the police, the mayors, the governors, and the President. They’re scared that they’ll accidentally jaywalk and end up like George Floyd. What are they going to do? They won’t be heard, so they are making themselves heard in the only way they can figure out how.

Property can be rebuilt, but lives cannot be restored. 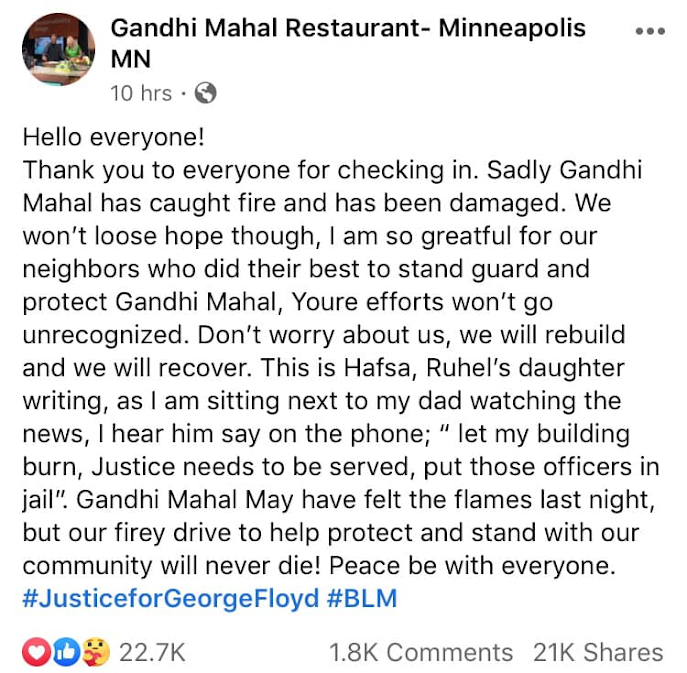 If anyone reading this wants to criticize the rioters who are burning down police stations, I urge you, before you type that comment on a Facebook post, call up a black or brown friend and talk to them. Let them be heard by someone.